It's election day in Ohio, a big money California legalization initiative rolls out, there's another national poll with a majority for pot legalization, Ireland takes big steps toward harm reduction, Germany gets set to deal with medical marijuana, and more. 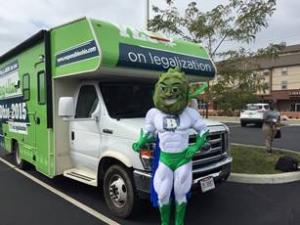 Will Ohioans vote for Buddy and Issue 3? The polls close in a few hours. (responsibleohio.com)

Another National Poll Has a Majority for Legalization. A new Morning Consult poll has support for marijuana legalization at 55% nationwide. That's in line with other recent polls showing a majority for freeing the weed, including Gallup (58%), CBS News (53%), and Pew (53%). Click on the link for more details and methodology.

California Initiative With Big Bucks, Key Backers Rolls Out. A legalization initiative backed by tech philanthropist Sean Parker, other deep-pocketed funders, and leading state political figures such as Lt. Gov. Gavin Newsom (D) was filed Monday. The Control, Regulate and Tax Adult Use of Marijuana Act is the latest of a half-dozen initiatives filed in the state. At this early point, it stands the best chance of making the 2016 ballot, given the financial and political clout behind it. Look for a Chronicle feature article later this week.

Vermont Senate Committee to Hold Legalization Hearing Next Week. The Senate Government Operations Committee will take testimony next Tuesday on proposals to legalize marijuana. The hearing is expected to seek answers to questions about how legalization would work. The legislature will consider legalization in the coming session.

Hillary Clinton Calls for Criminal Justice Reforms. In a speech last Friday, Democratic presidential contender Hillary Clinton called for a series of criminal justice reforms, including a ban on racial profiling, a ban on pre-employment questions about criminal histories, and the elimination of the remaining sentencing disparity between crack and powder cocaine. Bernie Sanders responded that criminal justice reform needs to include marijuana legalization, which he has endorsed.

Group of Studies Shows Mass Incarceration for Drugs Growing in Latin America. The Research Consortium on Drugs and the Law today released a series of new studies showing that mass imprisonment for drug offenses has increased across the region. You can read the reports here.

Ireland to Open Supervised Injection Sites, Looks Toward Drug Decriminalization. Irish drugs minister Aodhan O'Riordain said today that the government will open an injection site in Dublin next year, followed shortly by Cork, Galway, and Limerick. He also said he plans to push for the decriminalization of drug possession as part of a "radical cultural shift" in dealing with drug use.

Germany to Set Up Medical Marijuana Agency. The Ministry of Health has authored a draft bill that would allow sick Germans to use medical marijuana, with the substance to be prescribed and to be paid for by health insurers. The bill would not allow patients to grow their own. "It is our goal that in the future, more people in Germany will be able to receive cannabis as medicine than has been the case until now," said federal drugs commissioner Marlene Mortler. She said she wanted the bill pushed through the Bundestag by year's end, so the new law could go into effect next year.

(The Drug Reform Coordination Network, which also pays the cost of maintaining this web site. DRCNet Foundation takes no positions on candidates for public office, in compliance with section 501(c)(3) of the Internal Revenue Code, and does not pay for reporting that could be interpreted or misinterpreted as doing so.)