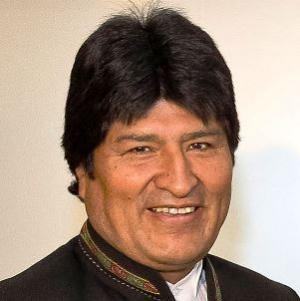 Evo Morales' backers are contributing coca for the cause. (wikimedia.org)

Marijuana at the GOP Debate. In Wednesday night's debate, only Ohio Gov. John Kasich had an opportunity to answer a question on marijuana legalization, and he's not for it. He said it would send the wrong message to kids and that he had spent years of his administration working "to rein in the problem of overdoses." Texas Sen. Ted Cruz mentioned marijuana, but only jokingly, offering to buy tequila "or even some famous Colorado brownies" for debate moderator Carlos Quintanilla after a heated exchange.

Law Enforcement Against Prohibition Endorses Ohio Legalization Initiative. LEAP has endorsed the ResponsibleOhio Issue 3 legalization initiative as the campaign counts down toward election day next Tuesday. "Legalization will take money away from the cartels, provide funding for public safety and health services, and reduce the violence associated with the illegal drug market. Passage of Issue Three puts us in charge, not the dealers," said retired Cincinnati Police Captain Howard Rahtz. The initiative is also endorsed by national NORML, but has split Buckeye State legalization proponents, some of who especially object to its "monopoly" on commercial grow sites. The initiative would only allow ten, on land owned by the investors who bankrolled the campaign.

Medical Marijuana an Issue in Kentucky Governor's Race. In something of a political oddity, Republican gubernatorial candidate Matt Bevin is supporting medical marijuana, while Democratic candidate and current state attorney general Jack Conway, is opposing it. This issue has been causing fireworks on the campaign trail. The election is next Tuesday. Click on the link for some of the flavor. [Ed: Conway ran campaign ads attacking Rand Paul as "soft on drugs" when the two were competing for the state's open Senate seat in 2010. It's not surprising to see Conway take a regressive stance on medical marijuana.]

Nevada Tribe to Join Medical Marijuana Industry. The Fort McDermitt Paiute and Shoshone Tribe is planning to open a medical marijuana grow facility for economic development reasons. "Jobs to bring our people out of poverty, to create the jobs that we can better our community," said tribal president Tildon Smart. "And the profits would be used for helping out with programs." The tribe said it plans to start growing next spring.

Los Angeles to Stop Giving Tax Certificates to Unpermitted Dispensaries. The city council voted Wednesday to stop giving tax certificates for new medical marijuana dispensaries. In 2013, the city approved Measure D, which banned most dispensaries, but that hasn't stopped them from opening. The city had been issuing tax certificates to them, but the council agreed that it was "insincere" to collect taxes from shops the city was working to shut down. Click on the link for much more detail.

Charleston, West Virginia, Mayor Calls for Drug Decriminalization. Charleston Mayor Danny Jones told local talk radio Wednesday that reducing crime requires radical changes in the drug laws. "I don't think we're going to be able to arrest our way out of it. I think we're going to have to look at these drug laws," Jones said. "The money you would save from incarcerations, which would be in the multi-billions you could use to help people. The crime there (in the west side of the city) would end overnight if you legalize or decriminalized drugs, but there would have to be a way to get drugs to people who needed them… to end the criminality in it."

North Carolina Governor Signs Partial Needle Decriminalization Bill. Gov. Pat McCrory last week signed into law House Bill 712, the Pilot Project/Used Needle Disposal bill. Under the bill, people who tell police they are carrying needles cannot be charged with either paraphernalia or drug possession based on residues in the needles. The bill also allows a handful of counties to undertake pilot needle disposal programs. The effort was led by the North Carolina Harm Reduction Association.

6,000 Federal Drug Prisoners Start Going Home This Weekend. Some 6,000 granted sentence reductions as a result of policy changes by the US Sentencing Commission will be released from prisons and halfway houses beginning tomorrow and going through the weekend. About one-third are foreigners who will be deported, but the other two thirds are going home to US communities. Another 8,500 are eligible for early release in the coming year.

Mexico Supreme Court Postpones Marijuana Legalization Case. The country's high court has delayed action on a case arguing that Mexicans have a human right to cultivate and consume marijuana. There is no word on when it will be heard.

Bolivian President's Backers Make Coca Campaign Contributions. Backers of President Evo Morales, a former coca growers' union leader, are providing bags of coca and potatoes for their campaign to seek a constitutional amendment to allow him to seek a third term in 2019. One coca grower union leader said his members had pledged 20 tons of coca to be sold to raise money for the effort. That would raise about $120,000 and, they point out, that coca would not be turned into cocaine.

(The Drug Reform Coordination Network, which also pays the cost of maintaining this web site. DRCNet Foundation takes no positions on candidates for public office, in compliance with section 501(c)(3) of the Internal Revenue Code, and does not pay for reporting that could be interpreted or misinterpreted as doing so.)