Bernie Sanders to Call for End to Federal Pot Prohibition 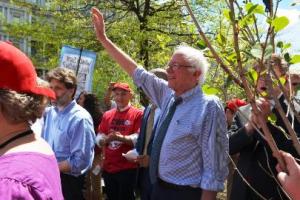 "Too many Americans have seen their lives destroyed because they have a criminal record as a result of marijuana use," Sanders said in prepared remarks for the event. "That's wrong. That has got to change."

No other presidential candidate in either party has gone as far as the independent Vermont senator. Democrat Martin O'Malley has called for placing marijuana on Schedule II, but Sanders wants it descheduled. Hillary Clinton has yet to stake out a position on marijuana reform, saying she wants to see how legalization is working in Colorado, Oregon, and Washington first.

The Sanders plan would not make marijuana legal in the states, but would remove the specter of federal interference for those states that choose to change their pot laws. His plan would also let pot businesses in legal states use financial services and take tax deductions currently unavailable to them under federal law.

Sanders is in line with national public opinion on the issue. Support for legalization has consistently polled at 50% or greater in recent years, and a Gallup poll this month had support at its highest level ever, 58%.

"Clearly Bernie Sanders has looked at the polls showing voter support for marijuana legalization," said Michael Collins, deputy director of national affairs for the Drug Policy Action, the political arm of the Drug Policy Alliance. "Marijuana reform was already moving forward in Congress but we expect this bill to give reform efforts a big boost."

Look for Sanders' bill to be filed as early as tomorrow.

The Drug Reform Coordination Network, which also pays the cost of maintaining this web site. DRCNet Foundation takes no positions on candidates for public office, in compliance with section 501(c)(3) of the Internal Revenue Code, and does not pay for reporting that could be interpreted or misinterpreted as doing so.)